And your chosen subject is....

In the last few weeks, I've been trying out a slightly different way of teaching features of academic writing. I've enjoyed it a lot + nice response from students = so I thought I might share here (and also give props to Richard Ingold, Kallia Crete and Julie Moore).

Basically, it hinges on subjects (as in subject verb object; not Maths, Chemistry, Bio) and three ideas (each one ripped off from the three people named above).

Many of my students have good English. But they tend to write like they speak which doesn't sound too academic. I wanted them to see the gap between their writing and more academic writing (for themselves rather than me pointing it out) - but more than that, I wanted them to understand why that gap was there so they'd be able to write in a more conventionally academic way.

Richard Ingold - in a recent post I did on abstraction, Richard gave a very detailed explanation in the comments section about how he helps his students improve their writing and understanding of academic conventions. He talked about nouns - this idea that noun groups in academic writing tend to work much harder - they carry a lot more of the sentence's meaning (e.g. (1) Research on exposure to television and movie violence suggests that playing violent video games will increase aggressive behavior). In this example, the subject of the sentence is working hard - a lot of meaning has been conveyed before you get to the verb suggests.

Kallia Crete - in an excellent post on teaching English for Chemistry, Kallia described a lesson in which she used a magazine article on a scientific topic and the relevant journal article on the same topic to allow students to compare differences in the writing style. She also got her students to come up with rules for academic writing based on their observations of the differences between the two texts.

At BALEAP 2015, Julie Moore talked about how useful abstracts were as resources. They are shorter than full articles but they display most of the features of academic writing. As well, if you're on the wrong side of pay walls, they're completely free. It also reminded me of something I read recently by Scott Thornbury (I think in Discourse Analysis) in which he talked about how any piece of language, even if very short, can be opened up to display many of the features of the language.


I took an abstract - we'd been talking about video games so this one seemed appropriate (I snipped it and stuck the image at the bottom of this post). So in class, I asked the students to: 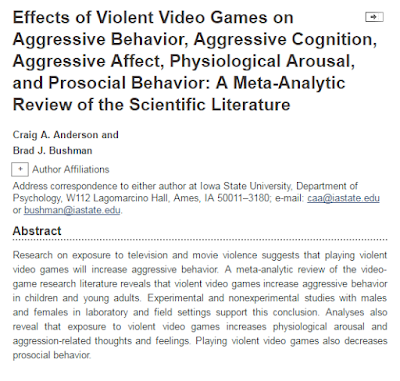